Coler is a soft-spoken 40-year-old with a wife and two kids. He says he got into fake news around 2013 to highlight the extremism of the white nationalist alt-right.

“The whole idea from the start was to build a site that could kind of infiltrate the echo chambers of the alt-right, publish blatantly or fictional stories and then be able to publicly denounce those stories and point out the fact that they were fiction,” Coler says. 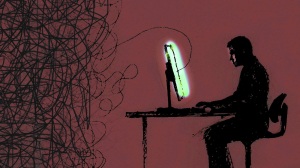 He was amazed at how quickly fake news could spread and how easily people believe it. He wrote one fake story for NationalReport.net about how customers in Colorado marijuana shops were using food stamps to buy pot.

“What that turned into was a state representative in the House in Colorado proposing actual legislation to prevent people from using their food stamps to buy marijuana based on something that had just never happened,” Coler says.

Fake news took off during the run-up to the election.  Coler was able to expand his operation.

“It was just anybody with a blog can get on there and find a big, huge Facebook group of kind of rabid Trump supporters just waiting to eat up this red meat that they’re about to get served,” Coler says. “It caused an explosion in the number of sites. I mean, my gosh, the number of just fake accounts on Facebook exploded during the Trump election.”

Coler says his writers have tried to write fake news for liberals — but they just never take the bait.

Coler’s company, Disinfomedia, owns many faux news sites — he won’t say how many. But he says his is one of the biggest fake-news businesses out there, which makes him a sort of godfather of the industry.

At any given time, Coler says, he has between 20 and 25 writers. And it was one of them who wrote the story in the “Denver Guardian” that an FBI agent who leaked Clinton emails was killed. Coler says that over 10 days the site got 1.6 million views. He says stories like this work because they fit into existing right-wing conspiracy theories.

The money is made by selling ads on the webpages that carry fake news.  The more engagement a story generates, the more ad revenue can be made.

Coler makes money from the ads on his websites. He wouldn’t give exact figures, but he says stories about other fake-news proprietors making between $10,000 and $30,000 a month apply to him. Coler fits into a pattern of other faux news sites that make good money, especially by targeting Trump supporters.

Coler made it clear he is not alone.  There are a growing number of fake news entrepreneurs working in the United States.

“There are literally hundreds of ad networks,” he says. “Early last week, my inbox was just filled every day with people because they knew that Google was cracking down — hundreds of people wanting to work with my sites.”

Favorite subjects: how bad Clinton is and how great Trump is.