Back in July, The New Yorker’s Adrian Chen began publishing articles based on six months of research he did on the Russian propaganda operation known as the Internet Research Agency.  He writes, 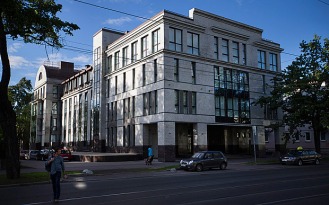 The building known as the “Troll Factory” in St. Petersburg, Russia where hundreds work around the clock posting information as directed by Vladimir Putin.  Photo by Dmitri Beliakov of The Telegraph.

The agency is what is known in Russia as a “troll farm,” a nickname given to outfits that operate armies of sock-puppet social-media accounts, in order to create the illusion of a rabid grass-roots movement. Trolling has become a key tool in a comprehensive effort by Russian authorities to rein in a previously freewheeling Internet culture, after huge anti-Putin protests in 2011 were organized largely over social media. It is used by Kremlin apparatchiks at every level of government in Russia; wherever politics are discussed online, one can expect a flood of comments from paid trolls.

Prigozhin, an oligarch and ally of Vladimir Putin. At the time, it employed hundreds of

Russians in a nondescript office building in St. Petersburg, where they produced blog posts, comments, infographics, and viral videos that pushed the Kremlin’s narrative on both the Russian and English Internet. writes that in Russia these troll farms or factories are not very successful pushing pro-Putin messages.  Russian citizens are not that naive; they know the web is crawling with trolls.  Chen writes, “The real effect, the Russian activist told me, was not to brainwash readers but to overwhelm social medial with a flood of fake content, seeding doubt and paranoia, and destroying the possibility of using the Internet as democratic space.”